Research: PVV MPs do well on Twitter – CDA MPs much less so

The COVID-19 pandemic has accelerated the digitalization of our society. Public life takes place largely online, as does the work in the House of Representatives and the election campaigns. For election campaigns, this means that creating support and gathering votes is no longer done by going out on the street and talking to people, but the connection must be sought online. Social media play an important role in this, and the various political parties are also fully committed to this. But how successful are the various political parties on social media? And how do you use social media most effectively – for instance as part of a public affairs campaign?

Based on our data, Dutch newspaper De Volkskrant analyzed the online reach of the party leaders in February. However, we not only analyzed the online activity of all MPs, but also of the party leaders and candidates of the parties with more than 5 seats. It appears that, on average, the MPs of the PVV (Freedom Party), D66 (Liberal Democrats) and GroenLinks (Green Party) are the most influential online. The MPs of CDA (Christian Democrats), SP (Socialist Party), PvdA (Social Democrats) and VVD (Conservative Liberals) score considerably less on online influence. Curious about our further analyses of other MPs and candidates? Then read on!

Online influence of politicians: the numbers tell the tale

Besides the fact that politicians, candidates and political parties can influence voters through social media, social media can also be used for advocacy. In other words, social media behavior can be interesting for organizations engaged in public affairs. Because of digitalization, advocacy is no longer limited to writing position papers, for example, but social media and online tools can also be used conveniently. Because of digitalization, advocacy is becoming more and more open. After all, anyone can view messages on social media, but can also check whether they are possibly fake accounts.

Politicians have the opportunity, thanks to social media, to strengthen ties with their constituencies and stay up to date on the opposition and relevant stakeholders. The complexity of policy making and the variety of stakeholders make the opportunities for using social media diverse. Active members of political parties, candidates and politicians are often active on social media and are interesting for an organization to engage in low-threshold conversations, or to effectively bring points of view to the attention of the public. The professional measurement of online influence and the use of online profiles are indispensable for an effective strategy.

When it comes to the social media strategy of politicians (and other stakeholders), there are large differences to be discovered in how they use their online channels. By using a professional analysis these differences can be mapped out. In order to do this in a structured way, Public Matters categorized the online activity of politicians into four different profiles.

These four profiles are combined with an influence score measured by the number of followers, reactions and interactions. This provides a complete picture of the online influence of politicians and allows for an appropriate public affairs strategy. For example, an Influencer profile combined with a high influence score can be very useful for bringing points of view to the attention of a wider audience. But when the Influencer takes a different point of view, this can backfire negatively on the person or organization it concerns. A well thought-out stakeholder strategy and approach is therefore extremely important.

How do our MPs score on social media?

Public Matters mapped the online activity of all members of the House of Representatives on Twitter, LinkedIn, Facebook and Instagram in July 2020, and repeated this measurement in January 2021 for the party leaders and top candidates. What are the differences between different politicians and their parties? Which MPs and which parties have the most influence online? Below we analyze the activity and influence of candidates and MPs on Twitter. 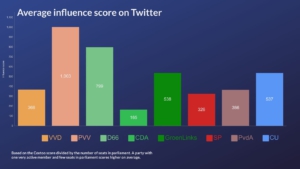 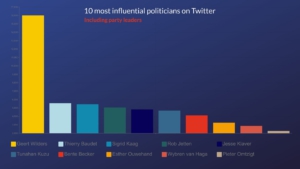 Of the parties with more than 5 seats in the House of Representatives, the PVV has, on average, the most online influence with an influence score of 1002.79. It is striking that much of the PVV’s traffic comes from its own party members and that, for example, PVV party leader Geert Wilders is often retweeted by party members. The influence of the PVV leader on Twitter rises high above the other politicians. This is followed by D66 with an average influence score of 798.95 and GroenLinks with an average score of 537.61. Forum for Democracy (FvD) has the highest average score with an influence score of 3435. This party has only two MPs and the average is very high due to the online influence of party leader and parliamentary chairman Thierry Baudet. Party leaders always have a disproportionately high influence score and for this reason we only included parties with at least 5 seats or more in the ranking. 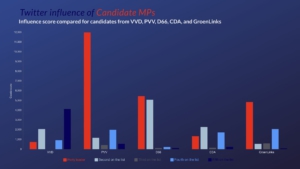 The figures show that 29% of the surveyed MPs are characterized as Influencers. A good example of this is D66, where party leader Sigrid Kaag and runner-up Rob Jetten both manage to get a lot of interaction on their profiles. In most parties, the party leader rises above all other candidates with Geert Wilders as the big outlier. On average, PVV MPs are more often the Professional and not an Influencer and often retweet the account of Wilders, but do not often enter the online debate. Only at D66 do Kaag and Jetten go fairly equal in terms of influence because of Jetten’s role as parliamentary leader. Member of the House of Representatives Bente Becker, who is fourth on the election list for the VVD, also has a high influence score. 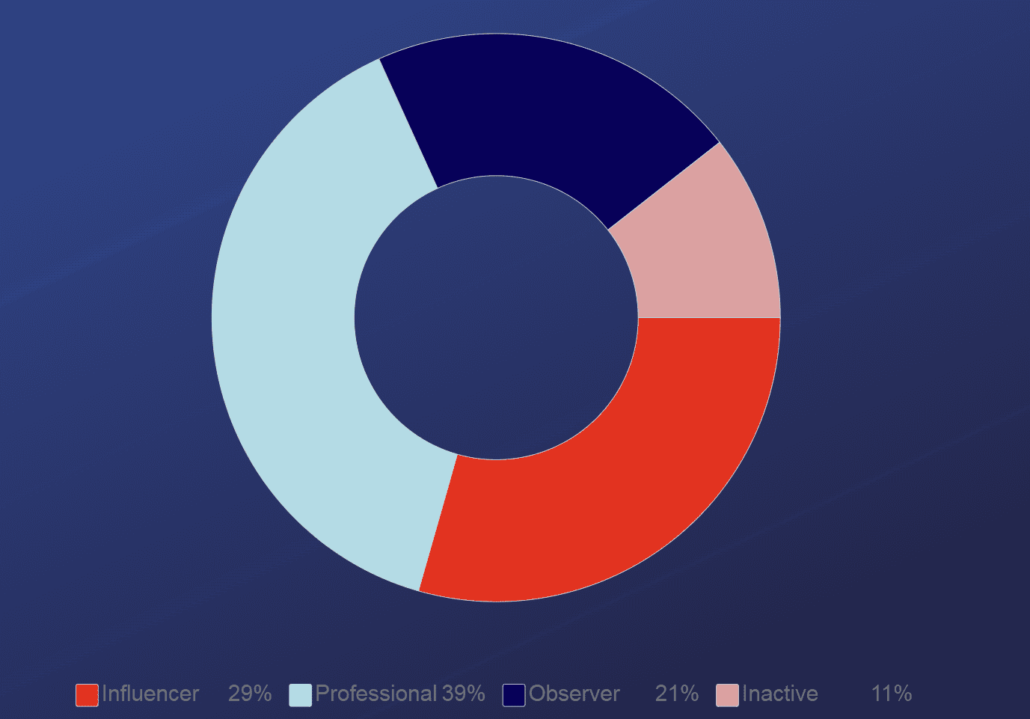 What explains the differences between MPs from the CDA and the PVV?

The online influence and activity of politicians can to some extent be linked to the voter profile of different parties, the topics they tweet about, how polarizing or controversial messages are and finally the social media strategy of a party.

The age of a party’s supporters seems to matter. The younger generation is more active on social media than older voters. VVD, CDA and PvdA attract relatively older voters and have a relatively low influence score. GroenLinks and D66, with their high influence scores, focus more on a younger audience. Finally, the high influence scores of populist parties FvD and PVV seem to be in line with Trump’s tactics in the 2016 election. The more attention you attract, the more influence you gain. The messages are often controversial and evoke reactions from both supporters and opponents. FvD’s score is particularly striking, given its low number of seats. There ain’t such a thing as bad publicity.

The social media strategy of a political party also seems to play a role because politicians sometimes receive support from their political party for their online presence. Some parliamentary parties employ more social media experts and spokesmen, and this can translate back into the online influence of the MPs.

The elections on March 17 will bring in new MPs who may be unfamiliar with an organization’s points of view, but of course the formation of the government also determines policy for the next four years. The ideal time to start working on a digital public affairs strategy. But how do you ensure that an interest is translated into concrete policy? Social media offer an additional channel to proclaim a message and bring it to the attention of the right stakeholders. From informing policy makers and influencers to influencing the sentiment regarding a specific issue with the help of social media monitoring tools – this is exactly where Public Matters can help. 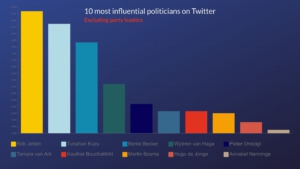 Read more news
The Netherlands on the move: transport and mobility in the upcoming coalition...